The Definitive Guide To How Plasco Works 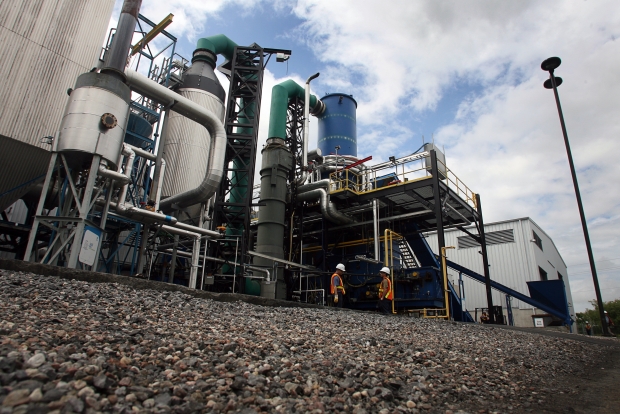 You may or may not have heard about the City of Ottawa’s controversial agreement with Plasco Energy Group. Plasco is owned by Rod Bryden – former owner of The Ottawa Senators, and a few years back they struck a deal with the city to build a facility on vacant unused land. The Ottawa Sun has been reporting on this extensively – mostly because a city imposed deadline lapsed. Plasma gasification is what Plasco does. Interested to know how it works? Check this link out courtesy of How Stuff Works. You can also check out this video on the company’s Youtube page.

In a nutshell – here’s how it happens:

Gasification is a process by which waste left over after food, glass and paper have been removed is fed into a gasifier where it undergoes a high temperature chemical conversion. Oxygen is removed and the rubbish is broken down into simple molecules, which are transformed into a synthetic gas known as “syngas”.

The syngas is used to power electricity generators. The electricity is sold to the Ontario provincial grid and the leftover solid, called “slag,” can be used in construction material.

It’s a bit different with Plasco though. They employ a different process with their technology, which holds a few patents that define the distinction. They use a non-incineration process. Instead of using plasma torches directly on garbage to burn it, they use plasma only to refine the gases released from the gasification process. This creates the slag that can be used in the construction of roadways. This patented process creates a lower electricity demand than competing technologies that have been used in Europe for a while, and yields other valuable by-products besides slag that include recyclable metal and recovered water (300 litres of water for each tonne of waste). You can check out an overview on the Plasco site here.

It’s innovative and an interesting alternative to just creating more landfills. The Ottawa Citizen reported in August that the city recently extended a deadline for Plasco through until 2014. The facility is scheduled to begin processing garbage in March 0f 2016. What do you think?

The Definitive Guide To How Plasco Works has one comment